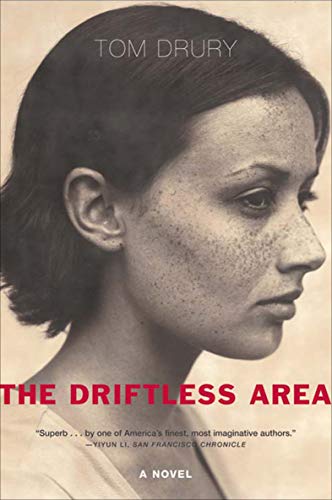 Isn’t this a wonderful cover photo?  Don’t you wonder who she is, and what she’s thinking, that woman of great but unconventional beauty, lost in her thoughts, so suggestive of mystery?  And the title — the “driftless area” — whatever could it mean?  It’s embarrassing to admit —  but, dear reader, I hold nothing back from you — that I had never heard of Tom Drury, the author, when I bought this book, a purchase based strictly on the title and the cover art.  Unbeknown to me, however, at least until a month or so ago, Drury is considered a “writer’s writer,” described by the New York Times, no less, as “a major figure in American literature, author of a string of novels without a dud in the bunch.”  Oops!  My bad!  To add to my humiliation, only a few weeks ago the Guardian included The Driftless Area in its “Top Ten Books Set in the American Midwest.”  At least by that point I had actually begun reading the novel, which had been gathering dust on my shelves since its purchase in 2013.  All I can say is — thank heaven for Challenges!  Had I not listed this as one of my selections for the 2019 TBR Challenge, The Driftless Area might still be sitting, forlorn and unread, in my upstairs junk room.  And that would be a personal loss, for it’s a truly wonderful book.

The wonder, as far as I’m concerned, begins with the title, which is not only poetic but geologically precise.  The Driftless Area (or Zone, as it’s sometimes called) is a relatively small area in the American Middle West that extends over parts of several states (for the precisionists among you, it covers extreme southeastern Minnesota, northeastern Iowa and western Wisconsin).  Because the ice age glaciers that smashed into the center of North America and created those flat-as-a-pancake midwestern corn fields missed the Driftless Area, the region has hills, caves, some of the oldest rivers in the world, sink holes, and rare bird and animal species that aren’t found elsewhere in the Midwest.  I don’t often wax rhapsodic about book titles, but Drury’s is a gem.  Not only does it give you the novel’s precise physical setting, it also hints at the strangeness and mystery of the story you are about to read.  And, on yet a third level, it’s a subtle comment on the way some of these characters navigate or, more accurately perhaps, drift through their lives.  A title like this sets the bar pretty high for the novel to come.  Fortunately, Drury is such a skilled writer he carries it off.

One of the pleasures offered by Driftless is to be drawn very gradually, almost imperceptibly, into the very peculiar world that Drury describes.  Conversely, this quality makes the novel difficult to review — aside from the fact that you don’t want to give too much away, it’s just a very difficult book to characterize.  On one level, it’s an ultra-realistic story set in a small town in the rural midwest; on another level, well, it’s not.  The blurb refers to Driftless as a type of “neo-noir” revenge drama, which it is, but — that’s not all it is (although that part of the novel is quite well done).  Although I think the professional reviewers might differ from me here, I found that Driftless operates on what I can only call a metaphysical level.  As one of the characters explains to another, there’s an “idea *** that time doesn’t exist;” that “everything that happened or will happen was here from the start” or that different versions of it were.  In other words, what seems to be chance might not be; that in the Driftless Area the seemingly random course of events might actually be precisely and irrevocably charted.

Oh, dear — haven’t I made this novel sound terribly, terribly serious?  Portentous even? Well, it isn’t either.  The events revolve around Pierre Hunter, a mid-twenties graduate of Iowa State, who’s taken his science degree and cello, and returned to his small home town of Shale, where he tends bar at a speakeasy called the Jack of Diamonds.  Pierre isn’t a slacker, exactly — he’s far more complex than that — but he lives his life stripped of the pretenses that most of us navigate by and that quality leads to unintended consequences.  One of which is Stella Rosmarin, the beautiful, mysterious solitary who saves Pierre’s life and becomes his lover.  Another is Shane, an itinerant criminal who tries to rip him off and ends up losing a small fortune in ill-gotten gains.  Drury is a master of terse, elegant dialogue that can be extremely funny in a very dry way.  He also has a wonderful knack for creating characters; even his minor ones tend to linger in the mind (one of my favorites is Pierre’s boss, a former Silicon Valley type, who worries that the Jack’s red vinyl chairs might be “too busy.” The locals who patronize the place, on the hand, are impressed by the air conditioning).

In conclusion, dear reader, I enjoyed this book immensely.  Do I recommend it without reservation, with enthusiam, to you?  Well……………… do you enjoy the Coen Brothers?  Do you like your reality straight-up, or do you prefer it mixed with a hint of the strange?  Can you accept that sun needs shade, that life needs death, that, as Pierre puts it “everything that succeeds creates the conditions for its own demise”?  If your answer to at least a couple of these questions was a resounding “yes,” then go for it!  You’ll love this book as much as I did.