It’s very heartening to Janakay that 2020’s Juneteenth is being given such wide notice, much more, it appears to her, than in previous years.  In part, of course, this is due to its coinciding with one of those pivotal moments of social protest and, hopefully, social change.  In part — and this is perhaps saying the same thing in a different way — it’s due to the growing awareness among white Americans of a holiday that has been given little attention or prominence by white institutions or a white-dominated media.  Janakay is not proud of the fact, but she was largely unaware of Juneteenth until a few years ago.  But then, Janakay has spent most of her adult life unlearning the version of the American Civil War that she was taught as a child.  The mythology of the “lost cause” and its fantasy of a civil war fought over tariffs and states’ rights rather than freedom and human dignity had no room for a day commemorating the end of a horror that had tainted the country from its beginning.  Could it be that after a century and a half we in these (theoretically) United States are finally willing to lay aside our comforting blanket of false history and recognize the pain and injustice inflicted so long on so many of our fellow citizens?  To acknowledge that all of us are entitled to justice and to ensure that all of us actually receive it?

Well, enough of the soap box!  Let’s observe Juneteenth 2020 with one of Janakay’s favorite formats, the miscellany!

Any fans of Kehinde Wiley out there?  Without being particularly knowledgeable about it, I’ve loved his work since I first saw it in one of my basic art history courses.  Wiley, of course, is best known for his official state portrait of a certain American political leader . . . .

Wiley is particularly known for his portraits of young urban Black men, clad in contemporary dress but posed in the manner of the elite of western culture while holding centuries-old symbols of status and power.  It’s a powerful way to bestow dignity and respect on a frequently marginalized group, as well as a slyly subversive comment on how western art has traditionally excluded or marginalized Blacks.

Have any of you, dear readers, traveled through the eastern and/or southern United States?  If so, you will no doubt have noticed the multiplicity of monuments to various leaders and notables of the lost cause, not to mention the omnipresence of their names on streets, parks, buildings and military bases.  For those of you who have successfully avoided current news (congratulations on that, by the way), many of today’s protesters have demanded the removal of these glorifications of the U.S.’ slave-holding past.  Wiley’s elegant and powerful solution (a commission from the Virginia Museum of Fine Art) was the creation of a gigantic bronze equestrian statue that acknowledged the past while creating an image for the present:

By sheer chance my visit last November to the Virginia Museum of Fine Arts (located in Richmond) coincided with the permanent installation of Wiley’s great statute in the plaza in front of the museum.  Although they’re not as detailed as I would wish, my photos do give some idea of the scope and scale of Wiley’s wonderful statue:

“Rumors of War” stands only a few blocks away from Richmond’s Monument Avenue, which contains five giant statues of Confederate leaders and is located almost directly across from the Memorial to the Women of the Confederacy.  Well done, Kehinde!

Have any of you, dear readers, seen “The New Yorker’s” June 22 cover?  The magazine has had some fabulous covers over the years, but this one by artist Kadir Nelson is something exceptional.  Titled “Say Their Names,” it’s a closeup examination of the violence inflicted upon black people in America.  The magazine’s website has an interactive feature that gives you factual information about each of the figures contained within George Floyd’s body, from Floyd himself to Medgar Evers (assassinated in 1963 by a member of the Ku Klux Klan) to Emmett Till (a fourteen year-old lynched in 1955) to “the Unnamed,” the enslaved people who were buried in unmarked graves. 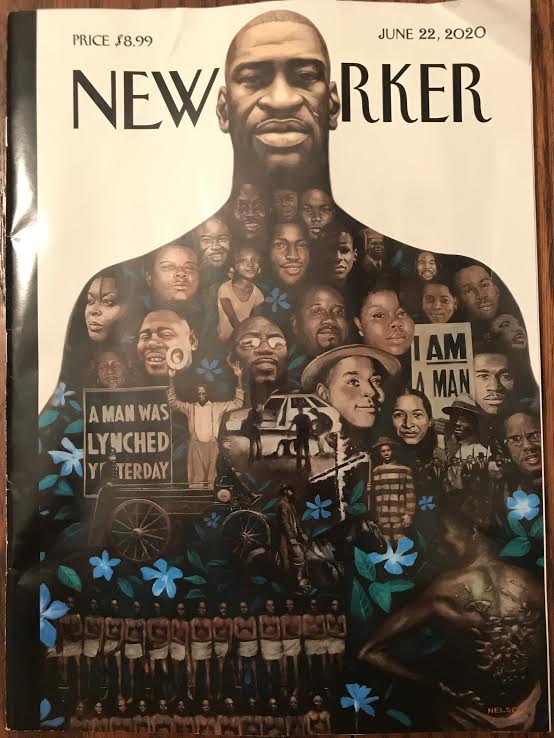 For a more all encompassing examination of slavery’s legacy in the U.S., the New York Times 1619 Project is an incredible source of information; it was timed to coincide with the 400th anniversary of the arrival of the first enslaved Africans in Virginia.

The poets always say it best.  What better way to end Juneteenth 2020 than with the hope that Hughes’ plea will, someday, be answered:

O, let America be America again—
The land that never has been yet—
And yet must be—the land where every man is free.
The land that’s mine—the poor man’s, Indian’s, Negro’s, ME—
Who made America,
Whose sweat and blood, whose faith and pain,
Whose hand at the foundry, whose plow in the rain,
Must bring back our mighty dream again.